The four-wing chateau with a long history and rich constructional development offers visitors a tour of thirty richly furnished rooms which in the past were ceremonial and dwelling rooms for members of the Desfours Walderode family of counts. Given that almost all the original furnishings of the chateau have survived, restored to their original place according to the historical photographs of 1932, the chateau rooms give the impression that their noble owners still inhabit them. Among the most interesting chateau rooms are the library with the portrait gallery of the owners and the Neo-Gothic dining room in the form of a knight’s hall. The oldest history of the building is recalled by the medieval cellar which is also open to the public. It is possible to take a stroll through the adjacent English park decorated with 18th and 19th century statues after the tour of the interiors. Costume or night tours and organ weekends are also organised in the building.

Points of interest on the tours

In 2010, an extraordinary discovery was made: fitness equipment from Count Mikuláš Vladimír’s bedroom. A system of rods, pulleys and weights had hung on the wall of the count’s bedroom next to the doors to the Trophy Room until the 1950s, when the equipment was taken down and struck off the inventory list as a worthless object. It was possible to identify it from the picture on the wooden box in which this „Muskelstärker-Apparat“ was bought at the turn of the century.

Allegories of the lives of man and woman

Two noteworthy paintings from 1656 hang above the doors to the Main Library, depicting the „rise and fall“ of the ages of man and woman.  Both begin with the birth of a baby in swaddling, and finish with them on their deathbeds. The individual stages of life are illustrated by figures, ten years apart, dressed appropriately for their age and accompanied by symbolic animals and fitting, if not always flattering, captions.

The wooden wheelchair is a reminder of the youngest sister of Mikuláš Vladimír Des Fours Walderode, the Countess Marie Immaculata. From childhood she had been partially paralysed as a result of cerebral palsy, and she was dependent on others for care.  It was for this reason that the countess’s room was situated right next to the guest suite of her mother, Countess Augusta Gabriela.

The oldest such devices originated in England in the 18th century and were based on a complex mechanical system of pulleys and bells; further innovations were made following the advent of electricity.  The ingenious device dispensed with the need to have staff waiting patiently by the doors of whichever room their masters happened to be using.  The majority of the castle rooms were equipped with buttons which, when pressed, would send a signal to the device, ringing a bell and showing the number of the room which had called.  The servants could remain in their rooms when they had free time, doing other work rather than standing outside the doors to the count’s apartments. 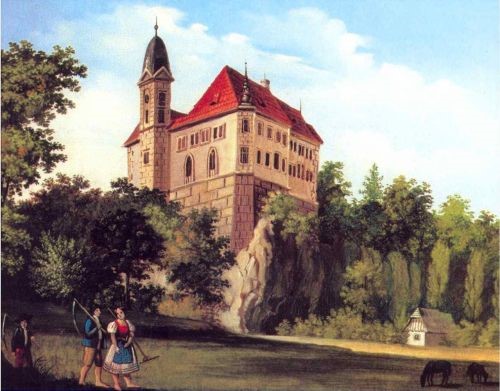 Are you lost? Don't worry, give us a call and we will help you.

Your questions are answered by:

This link leads to a page which, sadly, isn't available in your language. Do you wish to continue?